I wasn’t really sure where to start this review this week. So I figured I would go back to the beginning. I have not always been a Jamie Smart fan. When I first came upon his work, I thought he was a knockoff copycat of one of his fellow Slave Labor Graphics creators (not saying which one). Was I ever wrong! Since taking a chance on Smart’s work, I have enjoyed many of his comics both online and in paper form. I guess I should never judge a book by its cover.

This brings us to the present and my latest acquisition, Fish Head Steve by Jamie Smart. The story of a boy and his town, all of whom have had their head replace by common everyday items. There doesn’t really appear to be a reason why their heads were all replaced and there doesn’t really need to be. The book is just all out crazy fun. 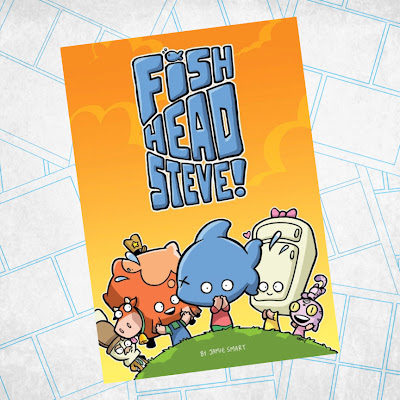 The main character Fish Head Steve, has a fish for his head. There’s Cowboy with a cow for a head. Steve’s sister Selena who has a cat for a head or maybe it’s the cat who has Selena for a head (some of my favorite panels include Selena and the cat.) There is a kid with a snowman for a head, a fridge-freeze, a loaf of bread, the list goes on and on.

Smart tells awesome comic stories aimed at children that any adult would also enjoy. The majority of the stories are 2 pages in length, but there are several subplots that run through the whole book.

Smart has such a distinct style. His round white eyes with small black dots for the pupil look primitive at first. It’s amazing the expressions he is able to capture with such simple line work. The character’s arms and legs are barely long enough to see. Yet his panels are always filled with action and excitement. 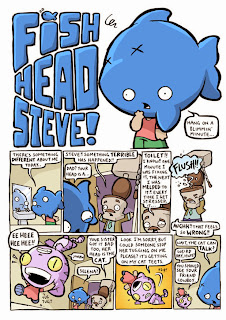 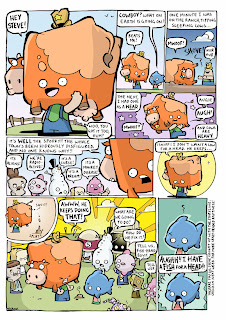 The Fish Head Steve book collects the stories originally published in the UK’s children’s comic DFC. I believe these are all the strips that were created, but I could be wrong.

If you have never heard of Jamie Smart, do yourself a favor and get over to Fumboo and have a gander at his work, you will not be sorry. (A sidenote, not all of Smart’s work is for kids, even though it is all done it the same style.)