I originally heard about Nowbrow Press from some tweets. A quick visit to their site gave me quite a few choices of books to be my first Nobrow Press book, so many choices that I originally didn’t order anything. Then about a month or two later, I saw Nobrow books solicited in the Previews catalog from Diamond. I decided I better order some before I miss out. I placed an order for Fight 2! and Nobrow 7. Eventually the books showed up but being the completest, I could not read Fight 2! until I had Fight!. This past May, at the Phoenix Comicon, I found a copy of Fight! at the AdHouse booth. 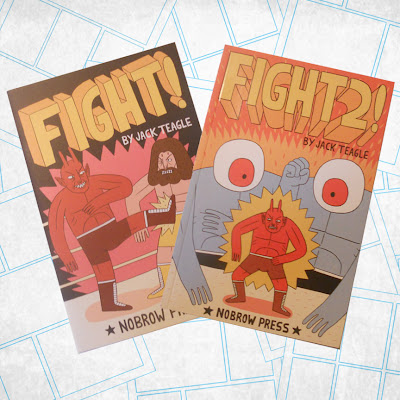 Fight! And Fight 2! are both the creations of Jack Teagle. What originally drew me to these books was the simple but emotional drawing of the characters on the covers. It was a plus that they also appeared to be about wrestling. When I crack the spin of these books I found something much more than just a silly wrestling book with fights. I found a compassionate story about what it might feel like to be viewed as a bad guy, even though you are good at heart.

The stories were quite a bit more emotional that I expected. I was hoping for some fist flying actions, which I received, but this was wrapped inside a story of misplacement based on appearance. In the stories, we follow Diablo the son of a great championship wrestler who just happens to be red and look like the devil. And due to these looks, he will never be given the shot at being a great champion like his father.

Teagle’s storytelling does not waste your time. Every panel has a purpose and helps to advance the story. Even when it feels like you are going sideways there is a reason and a move forward. And his art, while it looks deceptively simple, really hits the right spots. When there is a need to be soft and emotional Teagle’s art delivers. When there is a need for rugged and rough, his art also delivers. The best of both worlds. I mean you will feel ever punch, pull and kick delivered during the Diable vs. The Eyeball Twins fight scenes in Fight 2! 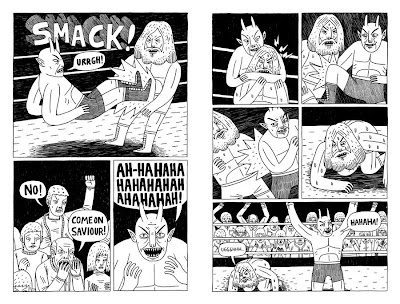 I’m glad I waited until I found a copy of Fight! before reading Fight 2!, if there is one draw back to these books is that they really should have been one book. If you are an independent comic fan and have ever watched professional wrestling you will enjoy these books.