This week while sorting my comics I came across BigBoy by Charlotte Dumortier and thought that this book would be perfect for my re-read of the week. I found Charlotte’s work while looking for 24 hour comics online and was immediately hooked on her work. Once I found out a copy of her 24 hour comic Big Boy was available for purchase, I had to order it immediately. 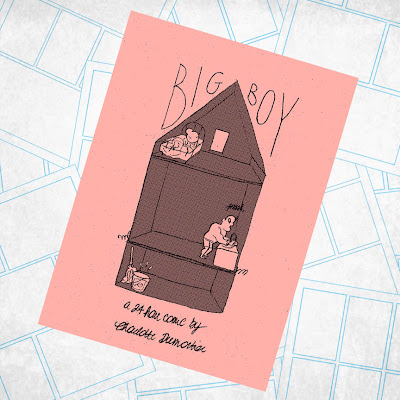 The story of Big Boy involves a couple and their creation during one hot and heavy sex session, a large sperm. Now a story about the previously mentioned sex and sperm could be handled in a very pornographic (maybe even gross) way , but not here. Charlotte’s art style and storytelling made me feel as if I was reading a funny animal comic that just happened to have sex and sperm in it, rather than a hentai book. It was fun and friendly, I might even say cute at points. Not to say that it doesn’t have a couple of gross moments when you actually think about them. 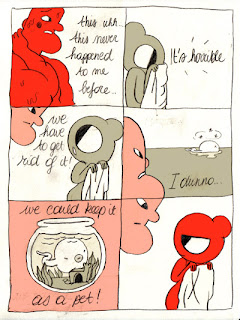 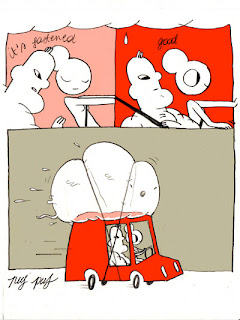 Charlotte draws in a very minimalistic cartoony style that invokes a lot of passion, but feels carefree. Each character has a definite personality in their line work that she uses to create them. Here storytelling reminds me of a cartoon style comic. There is a gag on almost every page and each one of those gags helps advance the story.

Some technical notes, the mini comic is in black and white. I believe Charlotte used some different color combinations of paper for the cover and interior stocks (mine was pink cover and green interior.)

I had so much fun reading this story again. I hope to check out more of Charlotte Dumortier’s work in the near future.

-Denny Riccelli creates comics under the pen name ‘dennmann’ he currently publishes the webcomic Cousin Harold and some mini-comics now and then, including Jenny Spookawski Ghost Girl. He lives in Peoria, Arizona with his wife and 2 kids.
Posted by dennmann at 6:14 AM