Head Lopper by Andres MacLean (with colors by Mike Spicer) is one heck of a book. I have never been a fan of sword and sorcery style books before. They always felt very inaccessible to me, like there was some secret language you needed to know before reading them. This is not true for Head Lopper, from page 1 until the first words come out of Norgal’s mouth everything flowed smoothly. 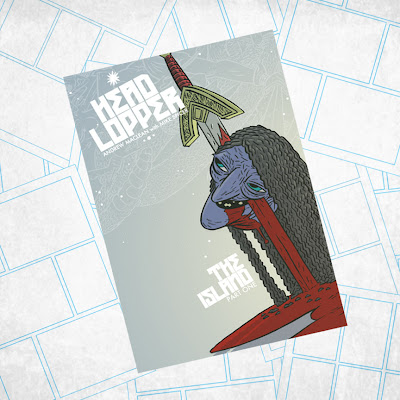 Andrew’s designs a story that gives you a good chunk of action and plenty of character development, without feeling force feeding you information. By the end of the story you have a good understand of who Norgal (the Head Looper) is, but will still want to know more..

As I mentioned earlier Head Lopper is a sword and sorcery story with out all the secret codes. Norgal battles mythical monsters, has a run in with pompous religious nuts (whom I’m sure have some type of sorcery abilities that we just haven’t seen yet) and carries the head of a witch around in a bag with him (proof that sorcery does exist in this world).

Andrew’s art is super clean and slick. I would also say that it has the proper amount of cartooniness for a comic. I have never been a fan of the ultra-realistic style and prefer my comics to be something that cannot be delivered through a photographic lens. If you feel the same way then Andrew’s art is perfect. The art is fill with emotion and strength, went Norgal cuts the head of a mythical monster you feel it. 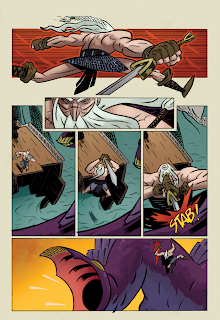 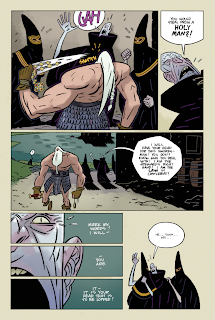 I have been a fan of Andrew MacLean’s work for a while now, having purchase Department O and Meatspace from him in the past (You can read the whole issue of Meatspace here). If I had one thing that has disappointed me about Andrew’s work is that each book so far has only run one issue. I hope that we get to see a couple more issues of Head Lopper before he moves on to something else.

I really enjoyed this book and cannot wait for issue 2!

-Denny Riccelli creates comics under the pen name ‘dennmann’ he currently publishes the webcomic Cousin Harold and some mini-comics now and then, including Jenny Spookawski Ghost Girl. He lives in Peoria, Arizona with his wife and 2 kids.
Posted by dennmann at 6:48 AM