One of the reasons I decided to start Comics Never Stop is that I was reading so many comics by people that my local comic shop never heard of and did not stock. This not a slight on the local comic shops in Arizona, the vast majority of them are awesome and support the local comic community every chance they get. But amazing comics by even more amazing creators were missing from their shelves, and once these creators started doing a little mainstream work, like Michael DeForge in Adventure Time/Strange Tales, there was still little acknowledgement of the creators work outside of the books that were solicited in the Previews Catalog.

Let me just start by saying Michael DeForge might be the biggest alternative comic creator to spring up since the late 80’s-early 90’s. It been just a few years since I started reading his work, and he appears to be working non-stop with new story coming out of thin air when I least expect them.

Today I have decided to take a quick look at his series Open Country. Open Country was originally scheduled to be a 5 issue series of mini-comics. My guess is that it would then be collected into a trade or larger format book. But that looks like it will never happen. I seem to remember reading/hearing in an interview with DeForge somewhere that he was done with Open Country and would not finish it. So why then review Open Country, well it was my introduction to the comics world of Michael Deforge. 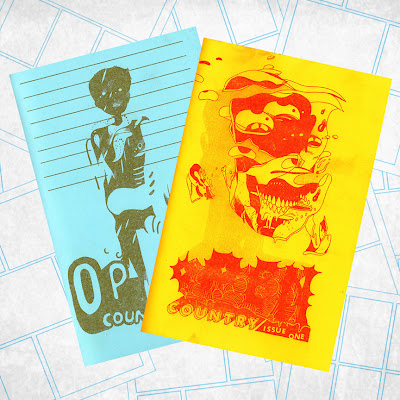 Open Country appears to be a story about a new art fad of psychic projection. In the story we start by seeing an art installation that is created by Beverly Hutch, we later learn that Hutch is using assistance to maintain her art installation and that she might not be a very nice or creative person. We find this all out from one of Hutches look-a-likes, Cody, that was hired to help her. There appears to be a wealth story in this area, but we will now never see it. 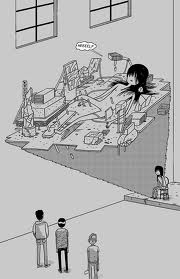 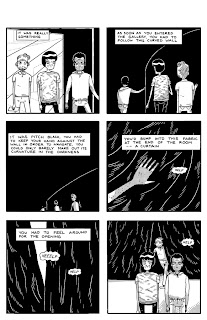 Michael DeForge’s art is amazing. He appears to draw straight from his gut and create comics from his subconscious. At first his art looks a little too arty and somewhat crude in places, but it fits the story so well. While reading you tend to forget that his character lack a nose, which is something that I remember bothering me at first. Instead you focus on the expressions and emotions that he gives his characters - surprised, worried, determined, they are all there. His art is very inviting once you begin to read the stories and I cannot see the stories drawn any other way.

Again I picked Open Country because it was my introduction to DeForge’s work, it also is a series that I think about regularly and wish he would finish at some point. I also hope to look at some of  his other work here in the near future.

-Denny Riccelli creates comics under the pen name ‘dennmann’ he currently publishes the webcomic CousinHarold and some mini-comics now and then, including Jenny Spookawski Ghost Girl. He lives in Peoria, Arizona with his wife and 2 kids.