This week I would like to talk a little about Erik Larsen and his series Savage Dragon published by Image Comics. Some might only think of Larsen as the guy who jumped ship from Marvel Comics (with six other creators) in the early 90’s to form Image Comics. But I gotta tell you, there is much more to Erik Larsen than meets the eye. I have been following Larsen on Twitter for a year plus now and daily this man talks about comics in the way that we all dream comics are, fun & exciting, full of beautiful art & fantastic storytelling. Erik Larsen loves comics and it shows. 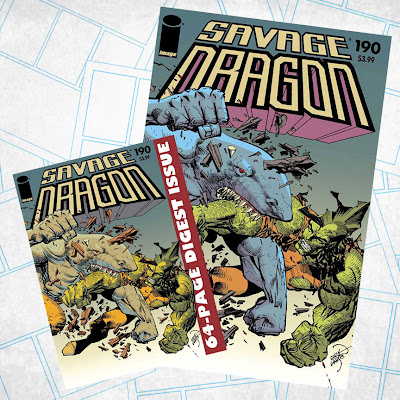 Recently Larsen published Savage Dragon #190. What makes this issue so special, well Larsen not only published it in the standard comic sized edit, but he also published it in a digest sized version. And the digest size does not just contain the same pages shrunk down to an almost unreadable size, but Larsen took the time and care to design each page in the standard edition so that the panels could be reproduced at the same size in the digest sized edition, just in a slightly different arrangement (see an example below). Oh and by the way, Savage Dragon #190 is also a great read, with some really cool art. 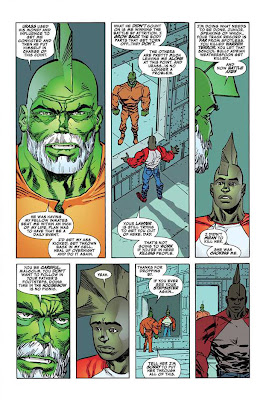 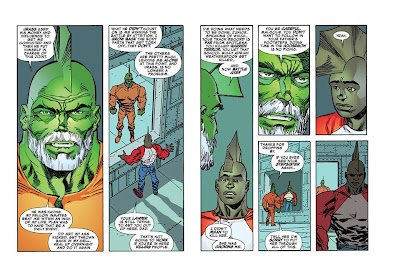 This is not the first time that Larsen has done experiments with the format of his books or story. In Savage Dragon #144 he designed a 121 panel story where each panel symbolizes a day in the life of the main character. In issue #187 he did some experimenting with color. Instead of doing the current realistic coloring style he used a more traditional flat color style. He also told the story from the bad guys point of view. And if that was not enough he used a traditional 6 panel grid to challenge his story telling abilities. There are many other issues that Larsen has set other restrictions on his storytelling. This guy is always up to challenge himself to improve, or just try something fun in his comics.

Erik Larsen had become one of my idols in recent years. His thoughts about comics, read through his Twitter feed, are a daily joy for me. His experiments with the comic format, both in storytelling and production is inspiring. But most of all you can tell that this guy is having a great time creating comics and could not be happier working on his own character Savage Dragon, which he has for the last 20 plus years and over 190 issues. If you haven’t checked in on Savage Dragon lately, issue 190 would be a great place to step in and see what is happening.

Posted by dennmann at 5:08 AM No comments:

I have been a fan of Tom Hart’s work since I picked up a copy of his Angry Criminal mini-comic back in 1991. For a while I did not know where Hart had gone. I stopped seeing his books solicited in the Previews Catalog, so I thought he had moved on to other things. I was happy to find out he had done another book, Daddy Lightning from Retrofit Comics. I ordered a copy as soon as I found out it existed. 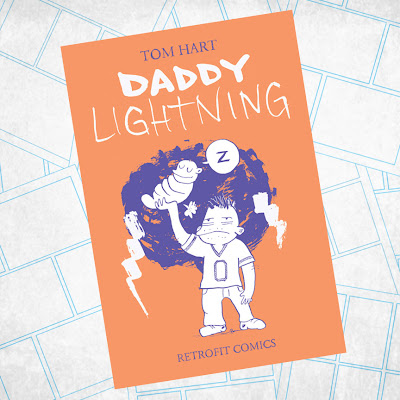 Daddy Lightning appears on the surface to be just another story about the insecurities of a new father. Will the father be able to provide for both the child and himself, what will people think of him as a dad, etc. The story almost feels like it goes in circles and is confusing, but that is fatherhood. After reading the additional none comic material in this book, I realize that in Hart’s case this story is much more than just that. This is his story of how he loved that struggle, but never got the chance to conquer it. Hart lost his precious little angel before she turned 2 years old. I wonder if that is why he disappeared from comics for a while?

The story is filled with typical Hart art, which is deceptively simple but packs a punch. I found myself feeling the father’s struggle, no matter how silly the situation might be, including the line about not having pood for a couple days because the father had put all of his child’s need first. About the first half of the book has to do with going poo, a sure since of a winner for me. 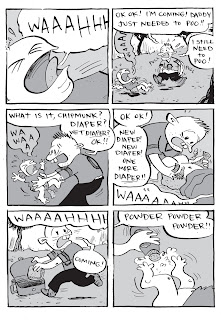 While this story might stem from very sad circumstances, I found it really to be uplifting and fun. It’s a must for any comic creator who is also a dad in his civilian life. There just are not enough comic books about being a dad. We really could use more of these and I’m glad Tom Hart created it. Daddy Lightning is 5 STARS in my book!

-Denny Riccelli creates comics under the pen name ‘dennmann’ he currently publishes the webcomic Cousin Harold and some mini-comics now and then, including Jenny Spookawski Ghost Girl. He lives in Peoria, Arizona with his wife and 2 kids.
Posted by dennmann at 3:23 PM 2 comments: