This past weekend I received copies of Copra #6-8 by Michel Fiffe that I had just ordered (this guy is super fast with shipping). Originally I discovered Fiffe’s work through another comic he had created called Zegas #1. I have to say that I was not that fond of Zegas, so I did not jump on Copra when I heard about it. Did I ever miss the boat on this one. 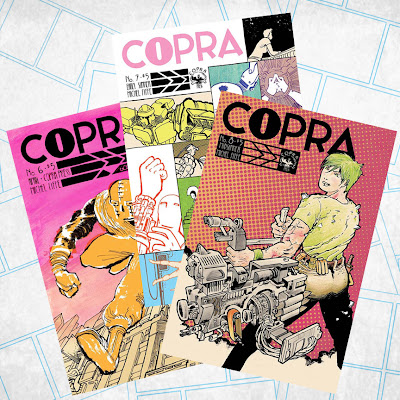 Copra is an awesome comic, full of super people with strange powers and sometimes ever stranger designs. Fiffe has a ton of influences shining through in this series, but the brightest one is fun. He is creating a comic that is fun to read, but even looks more fun to create (I would have said ‘funner’, but that’s not a word.)

There are a ton of characters in this series. Issue #6 read like the conclusion to a story arc, so I really was not sure what was actually happening. However the visuals kept me lock in place and I wanted to know more. It was a little like when you read your first issue of X-Men comic and you could make out some of the characters, but were lost on most of them, yet you could not wait for the next issue.

And issue #7 did not let me down. This issue filled me in on all the characters and gave some background and to who they are and why they are involved with Copra. And what Copra actually is. This issues is a lengthy read and probably my least favorite of the 3, but if does fill you in on a ton of background information.

Issue #8, armed with the knowledge from issue #7, is still pack with characters but was a little easier to digest. And they are was even better in this issue than the previous two. I hate to make comparisons to other books but I think Copra really justifies it. I felt like I was reading an issue of Suicide Squad featuring characters from Doom Patrol (oh and throw in a little Dr. Strange to be on the safe side.)

After finishing Copra #8, I immediately ordered Copra Compendium #1 & 2 (which reprint issues #1-6) by Bergen Street Comics Press. So I’m sure there will be a more fleshed out review of the story in the future.

As for the art, Fiffe is a young master of his craft. Taking full advantage of the comic page. His characters move through the pages, as if the pages were gymnasium obstacles in their way. Fiffe is a master storyteller and packs the pages with a ton of in your face action. Copra feels like a classic comic created with all of the modern comic know-how. 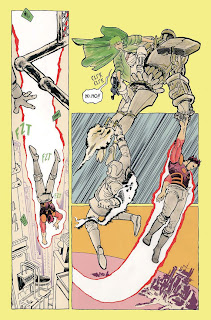 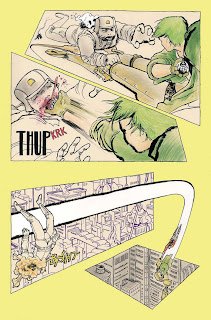 If there is one flaw with these books for me, it is that there might be too many characters (I'm not a fan of team books in general.) But I also realize that I’m missing five issues of story (at 24 pages each, that’s 120 pages of information.) I expect a totally different reaction to the characters once I have the chance to read all eight issue together.

On the plus side, after enjoying Copra so much I have gone back and given Zegas another shot. Michel Fiffe has made me a fan of his work. Hopefully I will be able to track down Zegas #0 & 2 soon.

-Denny Riccelli creates comics under the pen name ‘dennmann’ he currently publishes the webcomic Cousin Harold and some mini-comics now and then, including Jenny Spookawski Ghost Girl. He lives in Peoria, Arizona with his wife and 2 kids.
Posted by dennmann at 5:04 AM