This week it is another fabulous book published by Kuš! Komikss, Killman by Box Brown. I have been a big fan of Box Brown’s comics work for some time now, but I have stayed clear of reviewing them for one reason. I’m not a big fan of the way Box Brown’s self published minis look, after they have been printed and assembled. And since my mom taught me that if you did not have anything nice to say, then it was better to say nothing at all. However this is not true about Killman. Not sure where the books are being printed in Latvia, but where ever it is, they do a fine, fine job. 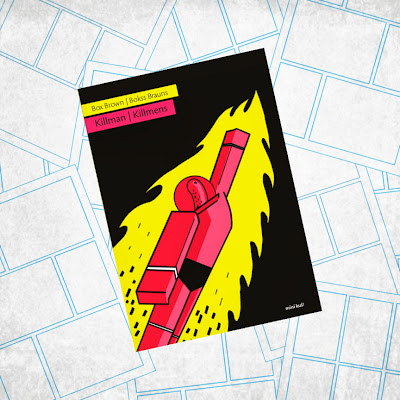 Box Brown is a master storyteller. Whether the page calls for 3 panels or 11, Brown creates an easy to follow narrative that had me flipping from page to page effortlessly. The story flowed so smoothly that I felt like I might have missed something and quickly dove back in for a re-read.

I try to take most of my comics more at surface value and do not search for a deeper meaning. So I am sure that Killman has some deeper meaning behind it, but for me it was just the story of an astronaut (and his sidekick) in a fight with some space aliens to keep everything safe. 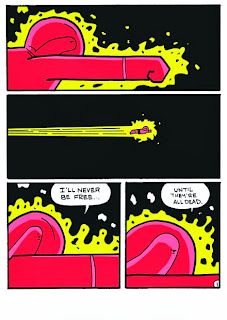 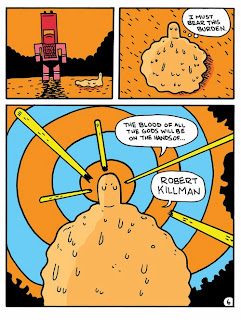 While the books is action packed and filled with story, it does feel like it ends a little abruptly or maybe this is just the first part of a multi-part story. If that is true, sign me up for future issues of Killman by Box Brown. I really enjoyed this book and have become an even bigger fan of the books published by Kuš! Komikss. Do not be surprised if you see many more reviewed of their books here in the future.

-Denny Riccellicreates comics under the pen name ‘dennmann’ he currently publishes the webcomic Cousin Harold and some mini-comics now and then, including Jenny Spookawski Ghost Girl. He lives in Peoria, Arizona with his wife and 2 kids.

Posted by dennmann at 5:14 AM No comments:

I have been a big fan of professional wrestling for years, although I do not have time to follow it religiously now a days, I do check in on it every now and then. When watching wrestling I’m always surprised that no one has created a long running serialized wrestling comic. Comic seems like the perfect vehicle for wrestling stories. 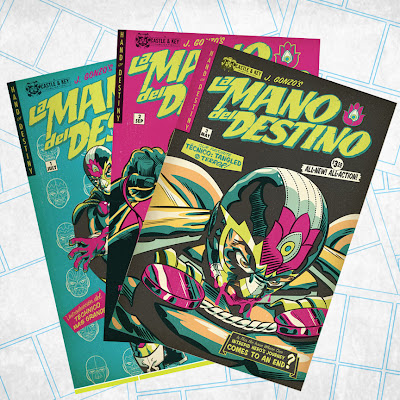 Now I know there are other comics that involve wrestling that have been published, but there is something special about Gonzo’s book. I’m not sure what it is. Maybe it’s the in your face art style that Gonzo uses during the matches. Maybe it’s the quite real life moments outside the ring. Or maybe it is the coloring that makes every page jump with excitement. Whatever it is, I will be sad when this series is over.

So far to date there are 3 issues of La Mano del Destino published by Castle & Key. All 3 issue can be read here for your enjoyment, but to really enjoy these comics, I would  advise hunting down the physical books. La Mano del Destino feels like a treasure that you missed during the 70’s-80’s era of comics rather than the typical slick books that are published today. 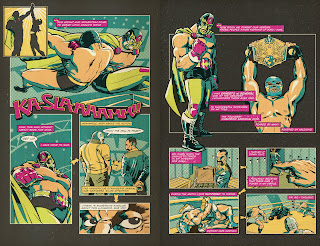 The wrestling is luchadore style, if you are not familiar with some of the common terms used in that form of wrestling, you might want to keep the internet within reach while reading. Each issue is self-contained, so you do not have to start with issue 1 to enjoy the story. However reading all three issues will enrich your understanding of the character and the larger storyline that is being played out.

La Mano del Destino is a topnotch labor of love. I really enjoyed each issue and was sad when I thought it was gone after just 2 issue (issue 2 was published in 2011 and issue 3 in 2013). But the series appear to be back and on track, well worth checking out.

Posted by dennmann at 5:06 AM No comments: