Just Read - Get Into Comix by Brad Dwyer

Full Disclosure - I have known Brad Dwyer since coming back to creating comics in 2008. We met at a parking lot underground zine fest, where I had bogarted half of my pal Eric Mengel’s table to give out free copies of my Get That Chicken mini-comic. Brad came over and was nice enough to trade his way more polished and professional looking Epic Tales of the Mundane mini for a copy of mine. Since then we have been good friends within the awesome Arizona comic community. Now on with the review.

Following Brad Dwyer on Twitter and Facebook this year, I watched as he tweeted and posted about the upcoming release of his 74-page digest sized Get Into Comix book. I have been a big fan of Dwyer’s work since meeting him several years ago and always look forward to reading new books by him. However I was a little more excited about this book than others. I mean he kept talking about how huge it was going to be a sharing sneak peeks of pages and panels he was working on. I could not wait until I had the finished product in my grubby little hands. 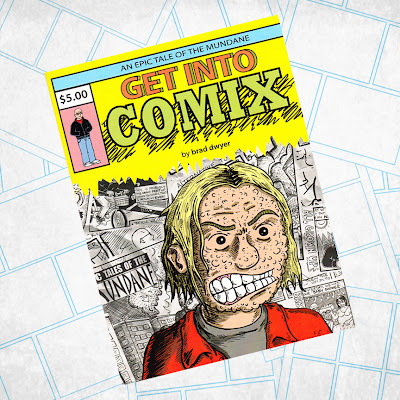 Get Into Comix is about Brad Dwyer’s journey from a kid to comic creator and all the bumps in between. The story follows Dwyer through the low points of his life (adolescents to early 20’s) and the self destructive behavior’s that began to eat away at his life until he finds comics, more precisely mini-comics. While the story wallows in the frustrations of growing up, it does not feel hopeless. Although knowing Dwyer now, it is hard to imagine some of these things actually happening to him, but they did. He swears that it’s all true. 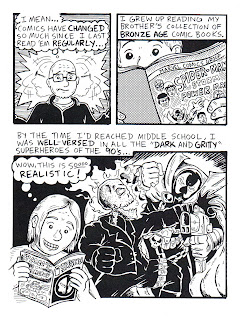 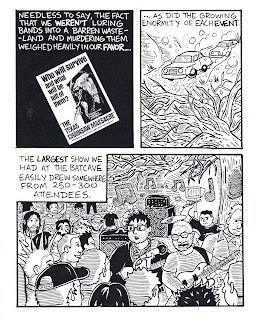 Brad Dwyer’s comics are reminiscent of the golden age of the underground. His art style is rough but refined and he seems to be able to draw anything and everything,  He writes autobiographical comics that are easy to read and very accessible. His storytelling flows smoothly from one panel to another. It’s as if Dwyer was made to make autobiographical comics and his life story seems to agree.

Earlier I mentioned how excited I was about this book prior to it's release and I can now say after having read it, I was not let down. Dwyer's work is like a special treat to me.

If you are a fan of autobiographical comics, then Get Into Comix is for you. Also pop on over to his Epic Tales of the Mundane site and read a huge sampling of Brad Dwyer’s other works, you will not regret it.

Update: Just found out that Brad Dwyer is currently doing a new comic, check out Ape-Men of the Apocalypse.

Email ThisBlogThis!Share to TwitterShare to FacebookShare to Pinterest
Labels: Ape-men of the Apoocalypse, Brad Dwyer, Epic Tales of the Mundane, Get Into Comix