I had originally ordered š! #12 because if featured a cover (and interiors) by Michael DeForge. When I received this little treasure in the mail I was shocked. Baltic Comic Magazine #12 (š! #12) is published by Kuš! Komikss and is 180 pages of comics magic. When I said I was shocked earlier, I meant it. I guess I didn’t read the book’s format information right and was shocked to find that it was so small (4” x 6”). Originally, I have to say that I felt a little ripped off, but after flipping through the book, it's size grew on me and I actually was amazed that all these pages of colored comics only cost me $13. Plus shipping (from over seas) was included (I have had America publishers charge up to $10 for shipping within the states.) 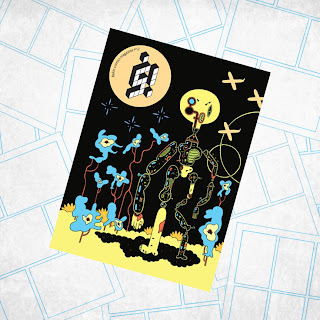 I wish I could say that I loved every page of š! #12 but most of the foreign strips were a little hard for me to understand, even though they were in English (I probably just need to read more of them.) However the drawings were beautiful from page 1 to 180. Some of my favorite strips were: Jane Mai’s (USA) Fortune Telling, about to girls and their adventures in a garbage dump. Chris Kuzma’s (Canada) Life Drawing, where the class appear to be drawing a large nude lady that has a little problem (don’t wanna spoil the ending). Michael DeForge’s (Canada) Leather Space Friend, about a girl and her leather space friend. Dustin Harbin's (USA) Future Medicine, a sneak peek at what a doctor’s visit might look like in the future. And John Martz’ (Canada) Ok? Y/N, about robots and their after life. As you can see they are all from North American. 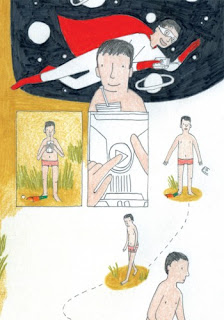 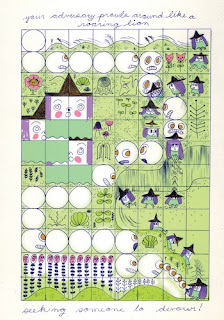 I really enjoyed the book from cover to cover and found my wanting to see more (maybe ever larger versions) of many of the foreign creator’s works. Irkus M. Zeberio (Basque Country), AnjaWicki (Switzerland) and Oskars Pavlovskis (Latvia) are some of the ones that I found most appealing from an art stand point.

Baltic Comic Magazine #12 (š! #12) is published by Kuš! Komikss in Latvia and is a fine looking publication. If you enjoy alternative comics that are expressive and avant-garde than this book is for you. I plan on checking out more of Kuš! Komikss’ publications in the future.

PS. All the links are so that I can go back and check out some of this great art, when I have more time. Hoping to educate and familiarize myself with their storytelling styles.