I have been reading Brian Ralph’s work since his days with Highwater Books. So when I heard that he had a new book, that was bringing back Reggie 12, I was very excited. Bringing back you ask, well Reggie 12 was originally published as a Free Comic Book Day edition back in 2004 by the now defunct Highwater books. I remember reading this FCBD edition and thinking that this is the type of comics that I wish there were more of. It is now 2013 and Drawn & Quarterly have issues a stunning hardcover edition of Reggie 12 (which is not due out until November, although a limited number were released at the San Diego Comic Con this past weekend.) 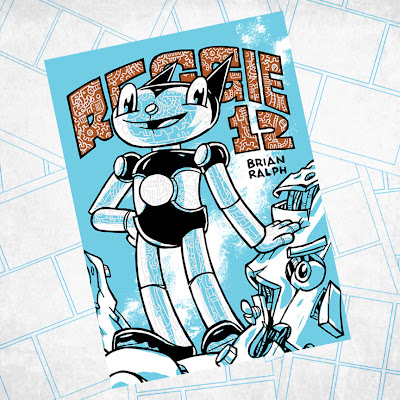 The digital version of the cover does not do this book justice. Those little metal gears in the title and on Reggie himself are all done in a spot varnish on the physical book. Absolutely beautiful!

The stories inside are funny and witty, they make you smile and chuckle as your read them. Although many times they cause you to pause for a second before you connect the dots and put it all together. Brian Ralph has a way of telling a story that feels very carefree and is effortless to read. One panel blends to the next without much effort on the readers part. My favorites are
the stories where he takes a very basic joke that we all know, plays with it and develops a much larger joke for the read to laugh at. Most of the stories are short one page vignettes (many are even half pagers), there are a couple of larger stories present, but no matter the length of the story they all build to a larger narrative and character build Reggie’s little world.

The art in Reggie 12 is excellent. Brian Ralph is a master of simplicity, his art is very cartoony but delivers the good needed to portray fun and sometimes meaningful stories. From the first story where Reggie sports a ridiculously large arm to the final one where Casper has a kitten, the art is key to developing the stories and characters that make you feel so close to Reggie and his friends, throughout their 96 pages of adventure.

I seriously loved this book and look forward to reading it again very soon. For those who would like to read a sample of the book, many of the stories included can be found at the Reggie 12 website.

-Denny Riccelli creates comics under the pen name ‘dennmann’ he currently publishes the webcomic Cousin Harold and some mini-comics now and then, including Jenny Spookawski Ghost Girl. He lives in Peoria, Arizona with his wife and 2 kids.
Posted by dennmann at 12:10 PM