Re-Read - I Will Bite You by Lambert

Every once in a while as a creator you read a book, which you wish you had created. I Will Bite You (the mini-comic edition) by Joseph Lambert was one of those books for me. I believe this book was self-published by Lambert through Submarine Submarine. 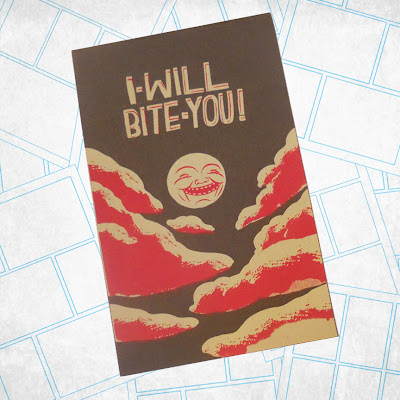 The story is based around a monster boy who appears to be anger and goes around biting things when he is angry. During the story we are shown, in a very subtle way, why the boy bites things when he is angry. The story comes to a head when the monster boy jumps into the sky and takes a little nip out of one of his world’s two suns, who appear to be heckling him during the story.

I really enjoyed this comic quite a bit, despite the fact that it was a wordless story. Usually I feel ripped off when I find out a story is wordless, but that was not the case here. Lambert did a good job of using word balloons filled with scribbles to convey communication between a few of the story’s characters. These scribbled balloons also helped to explain things that would have been missing if they were removed from the story. 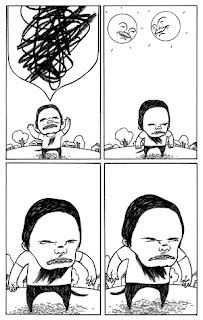 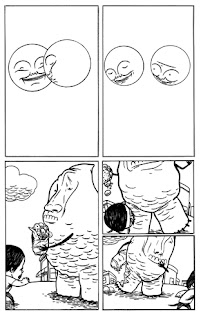 Lambert’s art does an excellent job expressing the anger of the main character though out the story. He also does a great job portraying the emotional responses of those who were bitten, without the use of words. A very moving piece of work, as I said at the top, I wish that I had created it.

Earlier I mentioned that this was the mini-comic edition, which is where I discovered Lambert’s work. The mini-comic version is probably out of print, but you are in luck. There is also a trade paperback edition that feature 126 pages of stories  by Lambert with the same title, I Will Bite You. I would have reviewed the trade, but I could not locate my copy at this time. Maybe sometime in the future?

-Denny Riccelli creates comics under the pen name ‘dennmann’ he currently publishes the webcomic Cousin Harold and some mini-comics now and then, including Jenny Spookawski Ghost Girl. He lives in Peoria, Arizona with his wife and 2 kids.
Posted by dennmann at 6:06 AM

Email ThisBlogThis!Share to TwitterShare to FacebookShare to Pinterest
Labels: I Will Bite You, Joseph LAmbert, Lambert