There is so much I could say about Darkness by Boulet. This story is amazing. Well at first it might not seem very amazing, but once you realize that it was created as a 24 hour comic, then it becomes amazing (although Boulet admits he actually needed 26 hours to complete it.) The detail in the art, the complexity of the story, both amazing. Okay maybe I’m going overboard here, but I really, really like this story. 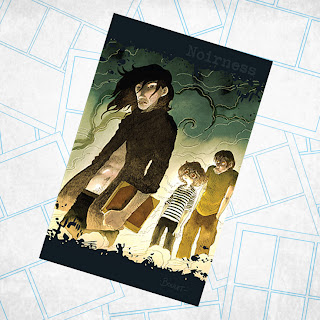 Essentially it is the story of two roommates, one who remains unnamed and the other is Jonas. The story is told from the unnamed roommates point of view, to a female friend of his who also is unnamed. The story is basically about Jonas and the effects he has on people that the unnamed roommate brings around to their apartment. Jonas is described as the pure element Dark. When girls look at Jonas every thing he is doing becomes dark and mysterious. Example, in the story Jonas is seen pouring a glass of whisky, but in reality he just getting some cereal. Because of this the unnamed roommate is looking for some type of solution to this Jonas problem.

The storytelling is excellent and flows smoothly from one page to the next. Usually 24 hour comics have several hick-ups or places where you can see that the artist was thinking or not sure where to go. Every point in Darkness looks predetermined and thought out. 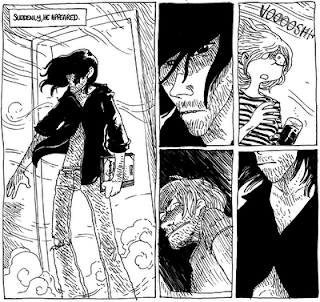 Boulet has a very free art style, which almost looks sketchy, yet there is so much there. The art throughout Darkness jumps off the page, and leads the reader smoothly through the story. Plus there are backgrounds in almost every panel, not just the establishing shots. In one panel Boulet drew a whole living room full of items, including a massive bookshelf, which is re-drawn in several panels throughout the story.

It you want to see the potential of a 24 hour comic, Darkness is it.

Darkness it available to read for free on Boulet’s webcomic Bouletcorp and was originally only available in French. Boulet has been translating his webcomics into English and I believe has now caught up and is releasing both French and English versions together. Darkness is also available through AdHouse, but had to be retitled on the cover as Noirness (probably due to Top Cow’s comic Darkness.) It’s a great read in either form.

-Denny Riccelli creates comics under the pen name ‘dennmann’ he currently publishes the webcomic Cousin Harold and some mini-comics now and then, including Jenny Spookawski Ghost Girl. He lives in Peoria, Arizona with his wife and two kids.
Posted by dennmann at 7:18 AM