Tom Scioli’s Final Frontier is like the comics I used to dream about reading when I was a young teen. Crazy wacked out character’s with loosely connected by a plot line, that appears to be changing each page. Fantastic stuff and maybe that is because he used fantastic source material as inspiration to create it.

What would happen if you took the Fantastic Four Wedding Annual, the first Galactus storyline, a dabble of Doctor Strange and threw in an issue of Amazing Spider-man for good measure? Answer: Final Frontier! I’m sure there are many other sources of inspiration for this story, but those are the ones that instantly came to mind when reading about the member of the Final Frontier as they encounter, Golememnon, Silver Spider and more. 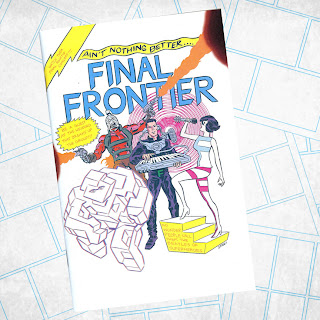 Final Frontier is essentially the story of a band whom are about to break up because the co-fronts have decided to get married and move on with their lives. If only things were that simple. On the wedding day everything that could go wrong, does go wrong and the readers benefit from it. The story is peppered with something for everyone and while there is a plot, most of the time it’s very loose and tends to wander a bit. Don’t worry the book has a satisfying ending that left me wanting more.

Scioli’s art is a thing of beauty. Majorly influenced by Jack Kirby, the art has flair and excitement all of it's own written all over it. Every way I thought to poetically describe the art, does not do it justice. While it is heavily influenced by Jack Kirby, it is also 100% Tom Scioli. It’s like Scioli is channeling a little Kirby magic through a brush or pen that Kirby once used. Those that scoff at the art and just think that Scioli is a Kirby imitator are missing the fantastic worlds Scioli creates with his pencil and pen. 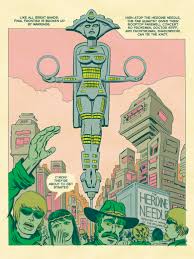 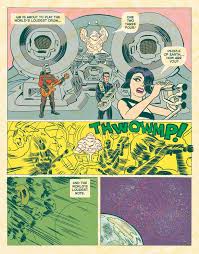 If you are looking for a wild fantastic romp through the world or super-heroes then Tom Scioli’s Final Frontier is for you. And hey, you don’t even have to buy it to read it, the whole story was original posted as a webcomic here on Tom’s website. (By the way, you would be doing yourself a favor if you read American Barbarian also.)

-Denny Riccelli creates comics under the pen name ‘dennmann’ he currently publishes the webcomic Cousin Harold and some mini-comics now and then, including Jenny Spookawski Ghost Girl. He lives in Peoria, Arizona with his wife and 2 kids.
Posted by dennmann at 10:20 AM